What does this have to do with Deja IIx?

Well, TextSoap 6 has been one of the key projects that has prevented me from spending much time on Deja IIx to finish it off. TextSoap 6 entering beta push me one step closer.

It’s been a while since I last posted. Most of my current attention is focused on getting the next version of TextSoap out in the next few months. As many of you already know, Deja IIx is more a labor of love, but it doesn’t pay the bills.

However, once TextSoap goes out the door, I hope to have some time to finish up the remaining pieces of Deja IIx and bring it out of beta. If you come across bugs, please let me know by either leaving comments or emailing me.

And no, I am not looking to bring Deja IIx to the iPhone. I will, however, make the source available if someone wants to actually try it. 🙂

This release is a fairly minor one, but addresses a couple issues. Support for minimizing the Deja IIx window has been added, as well as the ability to automatically pause/resume Deja IIx when it is miniaturized.

There was an additional tweak that will help some folks with older video cards. For some reason, it the older cards did not display the window correctly. The new Display preference allows you to overcome this issue, although full support for transparency suffers as a result.

The one big outstanding issue is the printing. I’m still working on getting printing to match as closely as possible, the behavior on an Apple II. I sort of broke some of the printing in the process of making changes, but hope to get it back up and running again in the near future.

Deja IIx continues to inch ever closer to a final release. Beta 6 addresses some file issues, namely the disappearance of file 13.

The only major outstanding issues are related to printing. Printing (to a Mac printer) is still in a state of flux, so please try not to count on the functionality just yet. I’m working on getting the Mac printer pagination to match AppleWorks’ pagination.

It’s the end of the year. After many a dry spell in progress, Deja IIx is finally in a beta state.

Occasionally I need to startup Mac OS 9 (under Classic) to see how Deja ][ would handle a particular issue. It’s interesting to compare the two:

Deja ][ screen handling was pokey at best. Deja IIx actually presents a true Apple II screen. In fact, Deja IIx no longer patches the screen writing code in AppleWorks. Instead, it emulates the Apple IIe (hopefully the reason for this will be more apparent in 2008).

Of course, there are other goodies Deja IIx like transparency, window scaling (for those with bad eyes and big monitors). Most of the goodies stem from the changes in the Mac OS in the past ten years. It is amazing how much code was thrown out between Deja ][ and Deja IIx (OK, so I actually didn’t do a direct port — but the point remains the same). There was so much code just to bring up a dialog with gray buttons. It boggles the mind how far we’ve come.

Well, with the changing times comes one more thing before the year ends. There has always been a custom icon available for your AppleWorks folder, to let you know it was for Deja ][. Well, with Leopard and the new app icon, it was time it was updated as well. Deja IIx includes an install option (under the AppleWorks preference section) to make it easy to get (it installs in your Deja IIx folder). 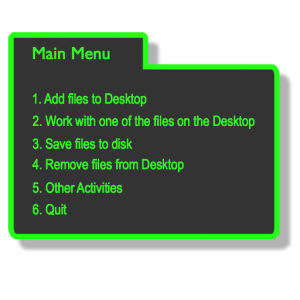 Santa — all I want for Christmas is a beta release.

All the features are in and most things now work, so I’m officially changing the designation from alpha to beta.

This release adds the big missing feature — printing. I wrote a TimeOut Mac Print Setup app to configure your printer. There are three different results you can get from printing.

Mac Printer – this prints through the Mac print architecture. The result is printed paper or PDF (if you so choose).

RTF Clipboard – this takes the print results and copies it to the clipboard.

Save to RTF – this takes the print results and allows you to save them to an RTF file.

The new Deja IIx Printer supports Bold, Underline, Superscript, Subscript, Italic (SC1/SC2) and Strikethrough (SC3/SC4). There is a mechanism for mapping characters per inch to actual Mac fonts and size. And you can specify different font/size mappings depending on the final results — so you can have one set of font mapping for printing and another when copying the results to the clipboard and even another when saving it to a file.

You can look at Deja IIx-PrinterCodes.plist in the Deja IIx support folder. I’m still working on an interface to allow you to edit these more easily — but that’s definitely a beta thing.

After many months, I finally had a chance to do some work on Deja IIx. Check out the release notes for all the details.

A bunch of User Interface changes to simplify things.

Drawing of the text display is handled a little differently than before. This results in a small increase in the percent of the processor that gets used (tops off around 14% or less when idle), but still a lot less than the 99% that the Deja ][ 1.2 uses when idle.

Most (non-graphics) TimeOut apps should work.

Yes, I think I have finally conquered the bank-switching issues that were causing lots and lots of problems. Previous attempts accomplished about 90% of what I needed, but getting that last 10% to work definitely took another 90% of the time.

I’ve also disabled to Native patching of the SANE math code used in AppleWorks. Apparently there is a format that is not currently supported and thus returns incorrect results (particularly for TimeOut Measurements). I hope to either support the unknown format (assuming I can find documentation) or allow users to toggle the native code on and off.

Again, you can use the auto-update feature or download using the link on the right.

I was almost ready to give up. After hours and hours of walking through code, I just could not find what I knew to be a very subtle change that was causing Deja IIx to fail (when the original Deja ][ did not).

I decided to spend a few more hours on it. In the course of things to come, I ended up more accurately emulating the Language card bank switching (which turns out wasn’t the problem). I also managed to find some PDF’s that include the original Apple II reference manuals (boy I could have used those a while back).

So, what was this elusive bug? It turns out that TimeOut (and possibly AW) were expecting the Hi-Res pages to get switched in/out correctly, not for graphics, but for data management. I had forgotten to process the Hi-Res bank-switching correctly.

Time working on this bug : several days
Lines need to be added : about 10
Knowing this bug is squashed : Priceless

Latest version is available with link on upper right of blog. If you have 2.0a17, you can use the check for updates to automatically update your software.